Nothing beats a local cheese! (Adventures in Cheese)

OK I admit it, I'm a cheese-o-holic, as is my son!  I have a passion for cheese in the way others have a passion for chocolate or wine.  It's just so more-ish!  Not only that, but there is so much variety with cheese and there are so many things you can do with it, other than simply eat it as it is.

Imagine then my delight at meeting Clare Noblet from Whin Yeats Dairy at today's Christmas Fair in Burton-in-Kendal. Clare and husband Tom started making cheese in the Summer, and are selling it from their hilltop farm at Hutton Roof, almost on the Cumbria/Lancashire border.

Having "spoken" to Clare on Twitter previously it was lovely to meet her in person, along with her delightful children, and we had a chat about my son's current dairy intolerance which has prevented him eating cheese for several months. Whin Yeats cheese is made with unpasteurised milk, and Clare mentioned that it appears that the pasteurisation process can cause intolerance issues with some people, as it kills off the microbes that naturally occur in milk, and thus in cheese.

As my son's dairy intolerance began after a bout of food poisoning, and his GP said this is not uncommon as the good bacteria get washed out of the system with the bad bugs, it might be the case that unpasteurised cheese will help redress the balance in his gut.

An interesting story in the press includes an explanation of how this happens,


Traditional cheese is one of the richest sources of living healthy microbes and fungi.

Unpasteurised cheeses and those with rinds contain even more species. Just a crumb of raw cheese contains over ten billion microbes containing bacteria and fungi. Studies show that people who eat cheese regularly have fewer heart problems despite the high fat content. As well as supplying new healthy microbes, eating cheese also encourages other microbe species to grow inside us.

With that in mind we are trying him with the Whin Yeats cheese to see if it helps.

Meanwhile, I am enjoying their cheese! I bought two types: a creamy farmhouse cheese and a wax-wrapped Wensleydale. Clare recommended keeping the latter for another week or so to let it finish properly, but the farmhouse was fine to eat now, so as soon as we arrived home after the Fair I tried it. It looks good, smells fab, and tastes amazing! It is, I have to say, one of the best tasting cheeses I have ever eaten!!! 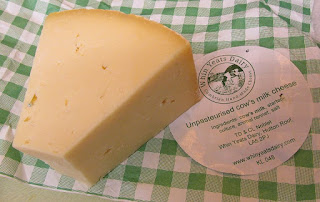 You'll have to wait a wee while to see the Wensleydale one as it's not unwrapped yet!