Vegetable spaghetti - make your own!

Hubbie and I love courgettes but my son isn't keen on the texture. The taste is fine, just the texture makes him gurn. So, we've been experimenting with different ways of using courgettes to try and alter how they taste. Sliced, cubed, boiled, stir fried: nothing quite did the trick, until we found courgette spaghetti!

Occasionally we saw pots of various vegetables spaghettified on the reduced to clear rack at the end of the day, and if they were 20-25p a pot max then we'd pick them up to try. Luckily they do freeze well so it's worth doing, and we found that the spaghettification didn't make son and heir pull faces!

But then we got to wondering about the cost of them if bought at full price, e.g. Tesco's courgette spaghetti is £1 for a 250g tub. So how does 250g compare to a whole courgette?

We buy our whole courgettes in ALDI in packs of three for around 79p normally, but this week they are on special offer at 49p for three. So we bought 2 packs, and they are nice sized ones too!  A quick check on the scales informed us that each courgette averages just over 300g, so that's 20% more than in the ready spaghettified pot from Tesco, even allowing for taking off the stalk bit and the flower tip. A whole £1 for less than one spaghettified courgette - sheesh!

Ahhh, I can hear you thinking, but yours is whole and the Tesco one is spaghettified, and it's probably faffy, takes a while and needs an expensive gadget to make courgetti...  but you'd be wrong! It's incredibly simple and takes less than 5 minutes to spaghettify a whole courgette - yes, less than 5 minutes... and the gadget isn't expensive either.

Well it could be if you wanted one of the posh spiralisers especially if it has a name endorsing it, but you can pick them up in cookware shops for under a tenner still. Meanwhile, I found my gadget whilst rummaging in the kitchen drawer for something else.  I'd picked it up somewhere way back when, and I thought it was a fancy kind of potato peeler, but soon found out it wasn't. Not able to work out what to do with it, I tossed it in the bits and bobs drawer and forgot all about it... until recently!

Now if you are a Lancashire woman like me, you'll be familiar with a Lancashire peeler for vegetables, which is nothing like those funny Y-peelers used across the Pennines in Yorkshire or elsewhere in the world. Using my forgotten gadget was simplicity itself!

It's a wee French thing, stamped  INOX fabrication l'avare depose le rap legumes around its rippled cutting blade. It works just like a Lancashire peeler but instead of having a straight slit to scrape off the peel, it has a wavy edged slit to make narrow strips: you scrape it along the courgette to make lengths of courgetti. I find it easier to cut the courgette in half across the middle as that way it's easier to hold them and the lengths aren't too lengthy, if you get my drift! One courgette takes only a few minutes to spaghettify (less than five) and costs a lot less than £1!  In true "Blue Peter" fashion, here's one I made earlier. 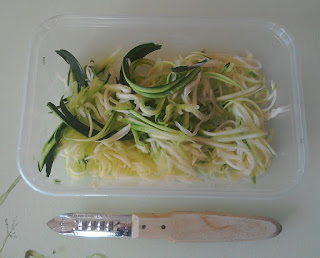 My INOX gadget is probably no longer made, but if you do happen across one, pick it up and add it to your kitchen toolbox, it's a really neat and simple to use piece of kit!