"It's like a puff pastry pizza!" was the verdict on our latest experiment in the kitchen. We cannot take the credit for it, having spotted the recipe video link by Tasty on the Facebook wall of a friend in the USA. It looked simple and tasty, so we wanted to try it. 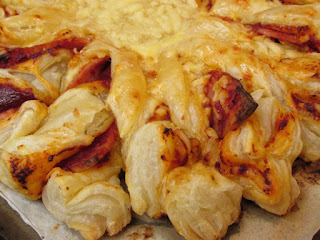 Put simply, it is 2 matching circles of puff pastry, some tomato puree, some grated cheese, and a bit of beaten egg to glaze the top... sounds easy eh!

For simplicity we opted to use ALDI's chilled puff pastry sheets. They come in a box, ready rolled with a sheet of baking parchment to stop the roll sticking together. We also used ALDI's own brand tomato puree in a tube (like dark orange toothpaste!), and a bag of their ready grated cheese.

To cut the circles the video used a dinner plate and a knife, but as we have a large stewpan with a glass lid, which has a handy metal rim, it made a snazzy circle cutter and was easy to lift off the pastry as it has a knob - unlike the plate which tends to suction itself to the pastry. Fortunately the pan lid was the same diameter as the width of the pastry sheet - handy eh! So we cut (or perhaps stamped is a better word) a circle out of each sheet. As the sheets are oblong there were bits left over - cut your circle near a short edge and you can use the bits to make something else.... bonus!

Once you have your circles, put one aside until you have done the next bit.

HINT: It is easier to create this on a baking tray rather than on a worktop and then try moving it onto a tray.

Spread a layer of tomato puree on the other pastry circle and then add a layer of grated cheese. Put the second circle on the top so they match up exactly. Now find the centre of the circle and place a small upside-down tumbler over the centre part. This forms the part you leave uncut. Then cut through from the tumbler to the edge of the ring - make sure you cut right through both pastry layers, making like the spokes of a wheel. On a dinner plate size circle you should be able to make 15 cuts, to give you 16 segments. Carefully lift each segment and twist it twice, don't let it break away from the centre part, you just want to give it a wee spiral effect.  Work your way round the circle, twisting each segment the same way until you have done them all.  Then brush the pastry top with a little beaten egg to glaze it, pop the tray into the oven at 400F/Gas Mark 6  and bake for around 30-35 minutes, or until crispy and golden.

Once cooked, remove from oven. Leave it to cool for half an hour, and then pull a segment off with your fingers and eat it. Mmmm! Enjoy! 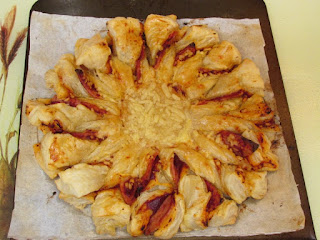 Straight from the oven!

Although we used ordinary grated cheddar cheese, it would be even better with Mozzarella, so next time we will try that. It makes a great share and tear or a party dish, as people can just pull off a chunk and eat it.

Ah yes, now we had some bits left over, so rather than waste them we made some cheese puffs. Using the tumbler we'd used for the centre of the twisted ring for some of them, and a wide tea cup for the bigger ones, we cut pairs of circles from the leftover pastry and added a layer of tomato puree and some grated cheese to each of the small ones. For the larger ones we used a layer of puree topped with a slice of cooked meat (we used chopped pork as we had some handy, but you could use any type of cooked meat), and added some grated cheese. Popping a second circle on top of each base's cheese layer, then we crimped the edges together using the prongs of a fork laid flat and pressed into the pastry all round the edge of each circle. We also had a long bit left over, so made a small square-ish one. Then with the last bit we rolled the pastry into some grated cheese until it all mixed together, then hand-rolled it until it made a long thin column of cheese pastry, which we cut into three parts and then gently twisted to make simple cheese spirals.  All these were popped onto a flat baking tray (actually it was a chip/pizza tray with holes in!) and brushed with the egg glaze, and again baked in the oven at 400F/Gas Mark 6  for around 20-30 minutes, or until crispy and golden. Yum! 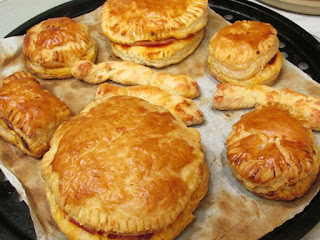