We're feeling somewhat down in the dumps this week, after the media brouhaha about BREXIT last Friday, so the boy and I did we always do when the world gets us down: we retreated to the kitchen to cook, or in this case, bake! 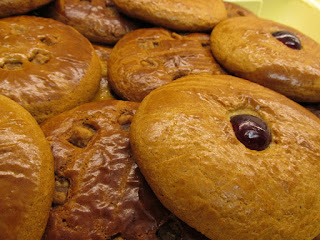 We had a mammoth session of international cake making as a way of saying we reject the demonisation of immigrants and foreigners that seems to have been unleashed by the UK leaving the EU.

The latter is something he has wanted to try for ages, but it's one of those recipes that takes a bit of time to prepare, as it has to be left overnight to chill and firm up, and only then can you get to the interesting bit: baking and eating them!

Medovníky are traditional festive cookies often served at Christmastime in Slovakia and are often beautifully decorated with white icing patterns or swirls. Not being artistic, he decided to split the dough into halves and one batch were topped with a half glace cherry, the other batch were sprinkled with Aldi's Winter Spice baking fudge pieces, then all were glazed them with beaten egg (rather than the recipe's egg white) before baking. We also left out the optional almonds due to my nut allergy.

The flavour and aroma was really interesting, as you might guess reading the list of spices that go into these cookies, they reminded us of lebkuchen but with a difference.

The recipe made 36 cookies each of which is about the diameter of a round beer mat, so we'll probably be eating them for days! 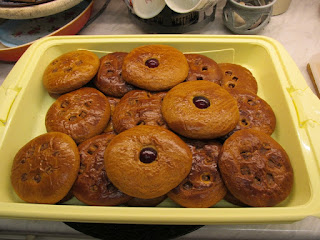