This family loves flapjack! It's been one of the bakes I have made since my son was quite small, and he has developed a passion for it. So much so that he is now trying out new recipes for variations on the basic flapjack taste. 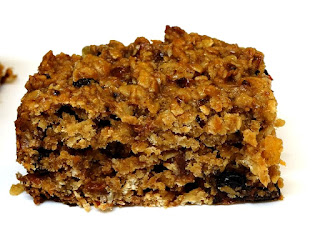 Having explored Strawberry Flapjack, and Mixed Berry Flapjack, I set him a challenge: can we make flapjack with mincemeat, as an alternative offering to the ubiquitous Christmas Mince Pies?

Enthused by the idea, and armed with a large jar of fabulously aromatic nut-free and vegetarian ALDI Mincemeat (The Pantry Classic Mincemeat) he set about making it happen.

The first try was good, but needed to be slightly more dense as it came out a little crumbly. The second try (see above) worked perfectly, and the texture was firmer and taste was just superb. I love mincemeat but I'm not a pastry fan, so tend to avoid mince pies, but the mincemeat flapjack is a great alternative.
In 2021 after ALDI changed the consistency of their mincemeat (it's now more runny) we experimented with a change of recipe and the updated version is now shown below.

We hope you might want to give it a try - it was described recently as "a winner" by someone who bakes a lot of cakes, so we were really pleased.
This recipe is suitable for vegetarians and those following a dairy free and/or nut free diet, but it contains gluten (in the oats).

In a large sauce pan over a low heat melt the molasses, margarine, sugars and golden syrup. Cook until all the sugar has melted into the mixture, stirring occasionally, then add the mincemeat and stir until all heated through and combined well. Don't boil!

Remove from heat and put to one side whilst you put the oats into a large mixing bowl, add the mincemeat/sugar/molasses/marg/syrup mix into the oats, mixing well until all the oats are coated with the mixture.

Line a deep baking tray or dish* (approx 20cm x 30cm x 5cm deep or equivalent) with baking parchment (the latter makes lifting it out so much easier!) pour in the flapjack mix and level with a wooden spoon. The mixture should be around 3 cm deep.  * We use a ceramic ovenproof dish instead of a baking tray.

Place baking tray/dish in a moderate oven (Gas 4 or 180C) and bake for around 45 minutes, or until the top is firm and golden brown.

Remove from oven when cooked and leave in tray until cold before lifting out.


Slice it into pieces using a large knife (or as we did, the meat cleaver as it is a long level blade!) 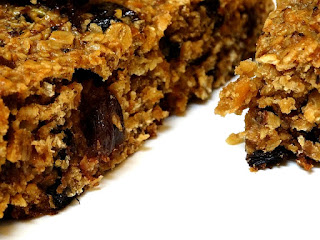