I've always loved carrot soup! One of the first recipes I ever tried was from a Marks & Spencer's cookbook and it was carrot and coriander soup. This was way back before it became popular and available ready made in every supermarket!  I loved it, and it's been a staple for the family ever since.  But I fancied a change from coriander, and having discovered that I can grind down the wondrous cardamom pods into cardamom powder, I wanted to try carrot soup with cardamom instead. It works so well!

Put olive oil into soup pan and heat up, add onion and carrot and cook until softened, adding cardamom and bay during the cooking. Add half the stock and simmer gently.

In a separate pan melt the butter and add the flour and make a roux, stirring continuously for 1-1½ mins. Don't overcook it or it will burn. Add the rest of the vegetable stock, a spoonful at a time, mixing well to avoid lumps, once it's pourable add it to the soup pan and mix well. Blend using a stick blender or similar.

Add the milk, do a taste test, add a pinch of salt if needed and simmer for another 3-5 minutes to make sure it's hot through. Serve hot with fresh bread.

If you use plant based butter and milk this is a great vegetarian soup.

During one of those late-night mother and son conversations yesterday about how nice the frittata was at the Kendal People's Cafe / PopUp Repair Workshop at the Castle Street Centre in Kendal, the son grinned and said, "frittatas are easy" and promptly vanished into the kitchen to make one.

He normally makes them in a cast iron frying pan on the stove, but this time he wanted to try a baked in the oven version to see how it worked.

Mother was drafted in to help: chopping onion and long red pepper into small pieces ready for a quick softening fry in the pan, and to crack eggs into the bowl without dropping the shell in as well (she failed!)

Son tackled the potatoes - nice fresh redskins that were just washed and sliced thinly, no need to peel them.

The end result was very tasty and proved that, yes, you can make frittata in the oven! Here's how...

Firstly, put the olive oil into a frying pan and shallow fry the onion, pepper and chorizo for around 3 minutes or so, adding the cholula sauce and making sure everything is hot through.

Crack the eggs into a jug or bowl and lightly mix with a fork to break up the yolks.

In a large mixing bowl combine the sliced potatoes and the contents of the frying pan, pour mixture into a large baking dish (ours is approx 28cm x 17cm). Level it down, then pour the eggs over the mixture. Sprinkle a pinch of salt on the top (only a little!).

Bake in oven on Gas Mark 4 for 100 minutes (1hr 20mins).  Remove from oven and lightly sprinkle a small amount of black pepper over the surface, cut into portions and serve hot. 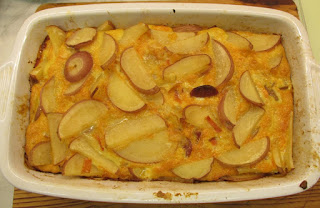