Now you'll be wondering what the title is all about!  It is the literal translation of the word reblocher, which gives its name to today's cheese adventure Reblochon.  Most of my cheese adventures will cover cheeses that are new to me but this one isn't, as I have met the mighty Reblochon before courtesy of my cousin's ex-wife who is French. On a visit to see them Cathy made a wonderfully tasty French dish called Tartiflette and I was so enamoured with it she brought another for me when they came to visit us. 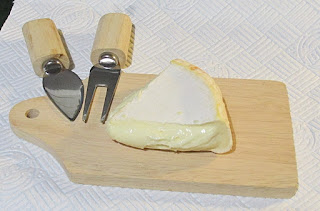 Reblochon was the first cheese of the Savoie - that mountainous Alpine region - to be granted the Appellation d'origine contrôlée certification back in 1958. It is a soft washed-rind and smear-ripened cheese traditionally made from raw cow's milk. The cow breeds best for producing the milk needed for this cheese are the Abondance, Tarentaise and the Montbéliarde.

Reblochon derives from the word "reblocher" which when literally translated means "to pinch a cow's udder again". This refers to the practice of holding back some of the milk from the first milking. During the 14th century, the landowners would tax the mountain farmers according to the amount of milk their herds produced. The farmers would therefore not fully milk the cows until after the landowner had measured the yield. The milk that remains is much richer, and was traditionally used by the dairymaids to make their own cheese.

It is a strong flavoured cheese with an equally pungent aroma, and it does leave a pleasant after-taste in the mouth after eating it. It is a slightly sticky soft cheese, rather like a ripe Brie in texture but not in flavour. 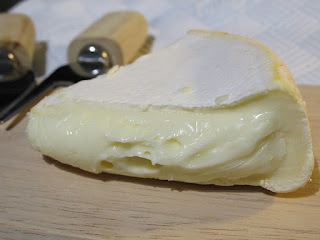 So other than eating it as is (which is delicious), how about having a go at making Tartiflette, which Cathy told me is a French peasant-style dish, but don't let that put you off! It's simple to make with easily found ingredients, but it tastes superb.

To make Tartiflette you will need:

How to make it:

Peel and cut the potatoes into pieces.
Cut the onions into slices.
In a frying pan, cook the bacon or lardons for 3 minutes with the onions so that they begin to brown.
Add the potatoes and cook over medium heat for 20 minutes.
Meanwhile, preheat your oven to 200 ° C - Thermostat 6-7.
Deglaze with white wine and cook for 5 minutes.
Add a twist or two of Ground Pepper (no salting with the bacon), and add the nutmeg according to your taste.
Cut your Reblochon in half to make two wheel shapes, keeping the rind. Keep one side to put on the top of the dish to make the topping (gratin) and cut the other side into small pieces to be mixed into the potatoes - bacon - onions.
In a baking dish, arrange the potatoes-bacon-onions mixture and pieces of Reblochon and then put on the top the half Reblochon to gratinate, rind upwards.
Place in the oven for 15 to 20 minutes so that the Reblochon becomes golden.
Serve warm with a green salad. 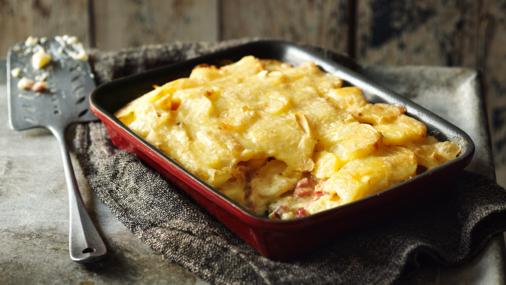 Click the image above to find the Hairy Bikers' tartiflette recipe on the BBC Food Recipes website.