A sugar tax - would it work?

Over the past two years I have read in the news the suggestion to have a sugar tax on sugary drinks in an attempt to control obesity, and my initial thought was, "What a load of rubbish!" Taxing something to make it unattractive does not work. Look at the history of tobacco sales in this country as an example of how well (or not!) taxing a product works. For years the government added a tax (duty) onto the sales of tobacco products, and it did nothing to reduce consumption. Both my parents were smokers and they just grumbled about the ever increasing costs and carried on puffing away!  There was no significant change until other things happened: the ban on advertising on TV, the ban on sponsorship of sporting events, banning smoking on public transport and in public buildings, and the carrying of a health warning on all packets. Finally, we saw fewer people smoking and that must be a good thing.

So how do we learn lessons from tobacco and apply them to sugar consumption? A straw poll round the family produced incredulity that anyone would think that a sugar tax would work. So what would make them stop and think about sugar in drinks and in other foods? The unanimous verdict was information. If every can of soft drink, every packet of sweets, every cake, had on it - in a prominent place - the information about how much sugar it contains, in an easy to understand format then that would make them stop and think!  So if a can of soda contains, for example, the equivalent of 9 teaspoons of sugar, then say so. Use a teaspoon graphic and the number in the bowl so it is simple to understand, and easy to compare against other products.

Here's a simple one I made earlier to demonstrate the concept: 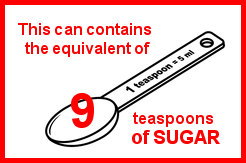 I am sure that manufacturers will not like it, as it will surely affect their sales of sugary products, but maybe that is necessary in order to encourage them to create new drinks or foods which are healthier and contain less sugar. The way to change people's behaviour is not by taxing it (that just raises money for government!)  but by information and education. If consumers have the information they can make informed choices about products, and they will do so. But they need that information to be provided in a simple user-friendly manner, unlike the amount per 100g info that much food packaging currently carries, which actually does not help a consumer understand how much sugar is in a product in a way they can easily relate to.