Oops! No instructions... how do I mix this marinade? 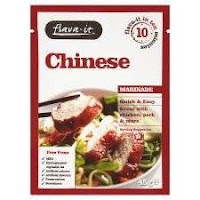 You know that moment when you decide you are going to use something from your pantry and then realise that you have no instructions as to how to use it? Well I had one of those a couple of days ago... in my case it was with some Flava-It Chinese Marinade packets which my son and I had happily emptied from packets into a airtight storage jar on the spice shelf whilst sorting out said pantry a week ago.

It's been a while since I'd used the Marinade last, and I had a vague memory that it used something like yoghurt to mix with the marinade powder to make the coating, but I wasn't sure. Another problem is that said son is currently on a dairy free diet for a couple of months, so yoghurt as a mixer was out of the question. So what to use instead? Water would be too thin, so I tried ALDI's Acti Leaf sweetened soya milk instead. Mixing a couple of tablespoons of the marinade powder into a cup of soya milk, and then poured into a plastic tray into which I popped the pork ribs to be marinaded, wrapped the whole tray in foil, put it in the fridge overnight, and forgot about it!

We had intended to have the ribs the following night, but we were sidetracked by some gorgeous smoked river cobbler and some chilli, ginger and lime mackerel, which soon became a rather delicious rice and fish dish. Meanwhile our ribs were still happily marinading in the fridge. Realising it was a use it or lose it moment tonight, I brought out the tray, removed the foil, not sure how the soya milk would have worked, and was astonished to find the ribs looked really well marinaded. The smell was good too, so I transferred them to a rack over a deep tray and into the oven they went, on Gas mark 6 for around 35 minutes, turned after 20 minutes so both sides cooked evenly.

I have to say that they were gorgeous when cooked. Leaving them to marinade for that bit longer really helped the flavour to infuse through all of the meat, and it proved that sweetened soya milk is a perfectly good substitute for yoghurt, or whatever it was I was supposed to have used!

Moral of the tale is: don't be afraid to experiment!
Posted by Anne at 03:28